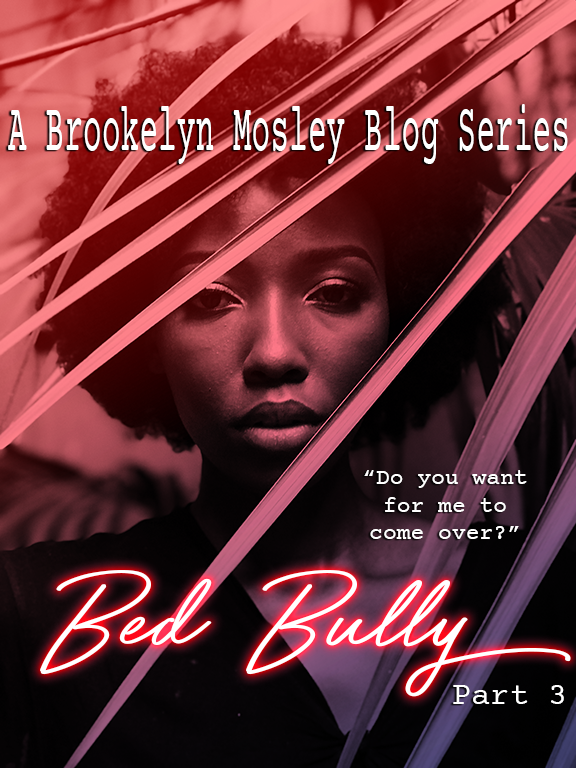 The tiny white card with Sebastian’s phone number on one side and his boss’s extension on the other could have burned a hole through Hazel’s dresser. She gave it that much power. Placing the little card stock there and never moving it. She purposely placed the card down so that his number was visible. Hazel refused to touch the card in those days after he gave it to her. She only walked up to it and peered down at Sebastian’s number, shaking her head and walking away again. It had been two days after Sebastian’s proposition and she hadn’t reported him or called him.

In her bed on a stormy Friday night, Hazel laid on her back her eyes focused outside her window. She always kept it open whenever it rained because she enjoyed watching the rain fall and smelling the air.

She sighed, turning her attention back on her dresser with the card. Since starting her business Hazel has been conscious about the time she puts into it, spending more time caring for her mind and body. Taking care of her mind consisted of meditation and working out. Baths had become the source of her relaxation sessions. But she still neglected physical pleasure. She could always do it herself. Put to use her ten digits but she wasn’t really up to it.

She needed to feel the breath of a man in her ear. The groan of his moans echoing around her bedroom.

Just the thought made Hazel sit up in bed and kick her legs off, slowly standing to her feet.

She tightened the sash of her gray cotton robe and approached her dresser. Twisted her mouth to one side as she stared down at Sebastian’s number.

Hookups without commitment wasn’t new for her. She did it throughout college and for the first few years in her twenties. She had her share of relationships but the friends with benefits package was always what she subscribed to.

So calling Sebastian wouldn’t be a problem.

“Why am I trippin’ right now then?” she asked herself.

When she couldn’t come up with a valid reason, she picked up the card, walked it over to her bed where her phone laid and scooped that up too.

She keyed in his number and it rang twice before he answered.

“Hi, Sebastian. This is Hazel Lockhart.”

As professional as she could keep it.

The move made him laugh. “Why so formal?”

She folded her lips in her mouth and said nothing.

“Okay, I’ll play along. How may I be of service to you, Ms. Lockhart?” He chuckled softly. “Decided yet?”

Her eyes shifted from left to  right. She released a loud exhale and said, “You know what, this was stupid. Forget I even called.”

“And how am I supposed to do that when I’m on the phone with you right now?”

“It’s impossible to un-ring a bell.”

They were quiet on the line. Hazel wanted to end the call. Click that red circle and go about her night and act like the call never happened, but she knew she didn’t want to.

“The rain does something to you too, huh?” he asked. His voice dropped allowing a low rumble to vibrate through Hazel’s phone, drifting through her ear canal and raising her temperature up a few degrees.

Her breaths became heavy which she tried to gain control over but failed.

“Do you want for me to come over?”

But she wouldn’t say it. Yes she’d done the hook up thing but those days were getting old. She may not have wanted a relationship just yet. That would be impossible since she was pouring a lot of her time into her business. But she wanted something stable. And if something came from that stability, she’d welcome it.

But something stable with Sebastian?

He was a mail carrier. That was not just his hustle… it was his career, and he seemed happy to be only that, a mail carrier… at least that’s what she thought.

His hopes, his dreams. She really didn’t know anything about him. But she knew Sebastian was not at all the vision she had of the man she would eventually end up with.

“Still there?” he asked.

“Yes,” she replied. Her voice was soft, softer than it had ever been with him. And he noticed.

Before she could protest, he hung up.

Hazel stared at her phone perplexed but excited too. Annoyed by his gall but turned on. She could have called him back and told him not to bother because there was no way she was letting him in her house if his visit was unrelated to business.

Hazel resorted to pacing  the floors of her bedroom. Her hand in her hair tugging near the roots but not too hard. She played out the scenario of having Sebastian in her place. There strictly to get physical.

“Hmm.” She stopped pacing. “That’s right. This is sex. Only sex. Nothing serious… Just. Sex. That I can control.”

The one thing she had mastered having. With her past men, she told them what to do and how to do it, and they listened. Most of them liked that about her, being able to say what she liked. Being bossed around. So that’s what she planned to do.

That put her at ease.

And that was enough to calm her nerves and to help Hazel focus on the part of herself excited for Sebastian’s arrival.

Little did she know… she was in for a surprise.