T H E  T A S T E… when sugar meets spice. Both drinks on their own are satisfying. One quenches thirsts while the other facilitates illicit behavior. One is exotic while the other is a classic. You’ll either like the taste of a Rum & Coke or you’ll hate it, there really is no in between. It’s smooth and an easy order which is probably why it’s a popular choice at the bar. You know what you’re going to get when you request this mix. Comfort in a glass with just the right amount of heat and sweet needed to get you drunk with sense. 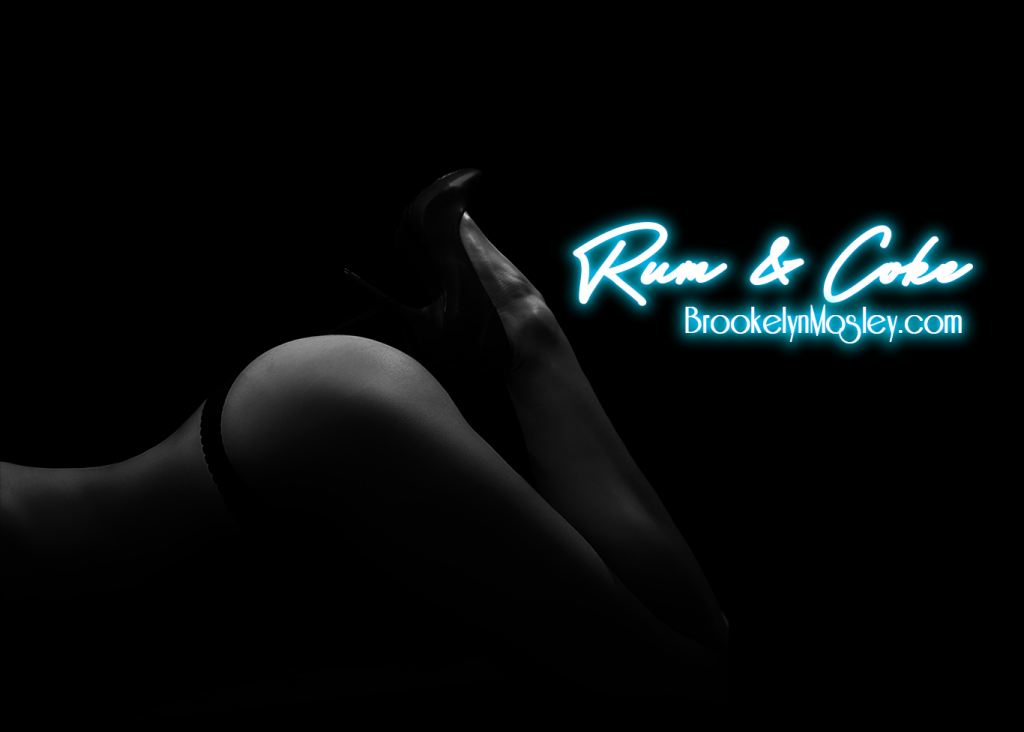 The cab had barely braked when Jaxson pulled open the door and I nudged him inside the car. The asphalt below my feet if I didn’t know any better slanted downward, uneven, as I stumbled into my seat. Mumbled words from the cabbie’s lips found its way through the Plexiglas separating the backseat from the front. A hazy night at least from my view, with the blur of Christmas lights glowing through the frosted back windows.

I rubbed my tongue against the roof of my mouth, savoring the aftertaste of the four rum and cokes I gulped like water at the bar we stumbled out of.

Once comfortable, my “boyfriend”, Jaxson, used my headrest to pull himself closer. The warmth of his breath greeted my neck before his lips were a welcomed second. The car moved, rolling over bumps and potholes causing the car to jerk me slightly over the leather seats.

Heat emanated from me like invisible white smoke. But the heat from Jaxson was hotter. His temperature obvious from his touch.

“I can’t wait,” he said on my neck and the idea caused my walls to pull in. My honey sugared the lace seat of my panties as I glanced in front of me at the driver who was focused on the lane of cars ahead of him. My eyes narrowed at his rear-view mirror, curious if he could see us. Not concerned if he could.

I turned to Jaxson, a small smile curving my lips. I gave a disobedient shake of the head and he kissed his teeth.

He wasn’t my boyfriend, but he wasn’t quite a friend either. Yet our excitement for public affections made us kindred spirits who just wanted to get off with each other.

His hands grazed my thigh before he palmed the fullest part. With one grip, he pulled my left leg toward him and I allowed my legs to slide apart.

He found that pink button and toyed with it against lace. I closed my eyes and licked my lips, enjoying as the fabric pressed against my lower lips warmed with wet heat.

“Take. Them. Off,” he whispered in my ear and the command was one I couldn’t ignore. We’d discussed the backseat of the cab, joked about it, and finally with enough rum and coke in my gut I was bold enough to go along with it.

A cramped space called for only one position, and so he got himself ready. Careful not to alert the cabby by way of the crinkle, he peeled back that signature gold wrapper for protection.

The view of New York through the back window was a sight to see filled with him. My insides molding to his length like I was made by my creator with him in mind.

I found my move and kept rhythm.

His hands were all over me as we struggled to swallow our moans. The fine hairs circling my prize paired well with me slipping and sliding against him.

I couldn’t keep my delight to myself at that point. I let him take control, pawing at my waist as he moved my hips to his stroke. He exhaled like he was running. Sucking in the cab’s air through bared teeth.

“What the… excuse me!” I heard from the driver’s seat. “Are you two kidding me?!”

Caught, my insides wrapped tight around Jaxson’s strength. Me grinding harder until the slick sounds of our reunion between our thighs replaced our moans.

The slam of the front door did little to discourage us.

Jaxson continued to meet my rock with his roll. My sway with his slide. His up with my down. Getting him off became an obsession. A carnal desire to see his face the moment he let his cream ice the condom.

Through closed eyes, I noticed when the red and blue lights pulled up on the scene.

But I was close.

So close I pulsed and succumbed to that familiar wave of ecstasy.

A trance-like state that made it seem like I was floating over myself.

I glimpsed the shadowy figure on the other side of the backseat window and had to look away to hang on to the climax that teetered at the edge of my fluttering walls.

Jaxson grunted and held me still.

I bit my lip and trembled on him as the last of the sensation melted away.

“Step out of the car,” the officer yelled.

I looked down at Jaxson and kissed his lips.

There was no doubt I’d be laying on the concrete bench in the drunk tank at the precinct… again.

But shit… it was so worth it.