T H E  T A S T E… tamed heat. Tequila on its own has a smooth and exotic taste.  The effect of it is subdued by the sweetness of orange juice and grenadine that is added to give this drink lots of color and appeal. The addition of sweet does little to mask the presence of tequila though. It’s still there. The tequila is just… well… tamed. It’s a visual refreshment. One of those drinks that attracts you to it before you can put a name to it. A tease even before it touches your lips.

On a beach in Mexico is where we’ll exchange vows, but that moment seemed so far away. I sat beside Mr. Carter on his apartment couch as we pretended to be interested in a detective solving yet another New York homicide on Law & Order. Emotional entertainment helped keep our minds off what we really wanted to do.

Between my legs ached whenever I was around him. It got worse with each passing day. It was like the closer we got to our wedding night the more impatient I got with waiting to experience him.

The more I wanted him.

My mind preoccupied with how he’d fit between my legs.

We’d had sex before, but not with each other.

Perfect relationships I only read about in books and sex was a sport in our past dealings with the opposite sex. So, we tried something different.

The word was more like a jail sentence than a choice these days.

I peered over at him from the corner of my eye to see him doing the same. We turned to face each other and laughed.

Let’s vow not to have sex before marriage, I said.

Well, maybe not that intense. But that was what I believed my pussy was doing the longer I denied her of the attention she needed. I kept her busy once sun set, and I laid alone in bed. My fingers would slide between my legs with purpose as I eased my fingertips behind the band of my panties. His face was who I saw as I drew invisible circles around my pink gem imagining it was him doing the polishing but with the tip of his tongue.

“That shouldn’t even be a question, Shayla. Of course you can.”

“I don’t know if I can wait until our wedding night.”

I smirked. “You know what.”

No fear of being judged or rejected.

I mean, he and I only took a vow of celibacy for the sake of practicing discipline. Proving that we saw more to each other besides physical attraction.

Being celibate until marriage was really my idea and I loved him for agreeing to practice patience.

He chuckled and took my hand. That simple touch sent a surge of energy right to the tip of my clit. I immediately crossed my legs and leaned in his direction.

“I’m serious, Jeremy.” I looked in his eyes and he did me.

“Two more months,” he whispered, moving in closer. “I’m worth the wait and I know you are too.”

I shut my eyes and dropped my head over the back of the couch. “We’re already engaged.”

“So, that means we’re half way there. These were your wishes–”

“I know,” I interjected.

“And I want to respect them.”

I sighed and scratched the back of my head. His crotch became my focus soon afterwards. I bit the side of my bottom lip in thought. Suddenly the solution became obvious.

After a moment of just the TV replacing our silence, I asked, “how about we do something else then?”

“Anything involving touching you Shay is a bad idea for me right now. My patience is thin too, love.”

I smiled. “You won’t touch me. You’ll touch yourself.”

His brow arched. “And what will you be doing?”

He stared at me and I did him. I knew presenting this option would be a risk so before he could shut my proposal down, I unbuttoned my jeans and slid my fingers down the outer lips of my crease between my thighs.

I heard him draw air in slow through his nose when I closed my eyes and allowed my fingertips to make contact. A soft moan escaped my mouth as I opened my eyes and turned to him to witness his expression as I massaged the tip of my pearl with the pad of my finger.

He licked his lips and watched, his right-hand clenching and releasing at his side. Jeremy’s eyes moved from mine to my moving wrist then up to my eyes again.

“Join me,” I whispered. The sensation of my caresses matched with his full attention was a decadent combination that made me jump a little as my fingers became slick from my wetness.

His hand moved slow to the top of his jeans. I bit my bottom lip as he undid the button and his zipper hissed. Jeremy’s hand slipped into his jeans and returned wrapped around his erection.

The view of his hand sliding up and down his dick made my eyes widen and my jaw drop.

I’d never had a look at what he was working with before.

And in that moment, I was glad I didn’t because the surprise was well worth it.

I watched him, and he watched me. I witnessed as the head of his dick glistened from his excitement and my mouth watered at the thought of flicking my tongue along the smooth curve of the head to savor him. Heat settled at my lower lips and I spread my legs wider to glide my finger around that special spot slower to give that effect that sent my neck arching and my jaw dropping.

“God,” I heard him breathe as the wave of my release made me grip the curve of the couch cushion below me. I held my breath and shut my eyes tight, submitting to myself.

Submitting to the moment.

I stirred and bucked, this climax circulating through me stronger than the others. The feeling snatched control from me and relaxed my mind.

He released a long, sexy, guttural growl and my eyes peeled open just in time to watch the spurt of his seed pump from the tip and dot his jeans. And for the first time, I was jealous. A little disappointed that it didn’t land anywhere near my lips.

We looked at each other as our chests rose and fell from exhaustion. Licking our lips craving more.

Then we smiled, pleased by the tease.

His eyes swept me from my face to my neck that were wet from sweat. He asked, “how much longer do we have, again?”

I stared at the digital clock on his cable box and sighed. “Only two months, five days, and five hours.” 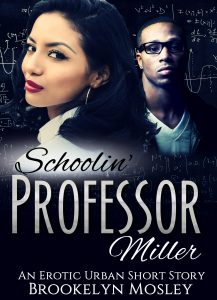 Want this story? Click Here to Join my BK Insiders Club and get this story and another one in your inbox today just for signing up.