For me, creating projects around the holidays is significant because holidays are markers in time that are consistent making a holiday project something you can return to every year and not get bored with reading… hopefully.

Last Christmas, I released my short story Unsilent Knight and made it available for free for five days. I knew I didn’t want to publish another short via Amazon this year so I decided to come up with something else.

At first, I thought about blogging every day for the month of December. But the way my patience is set up, I wouldn’t make it past day ten. Plus, when I actually sat down to plan the blog posts, the topics were all over the place and I didn’t find them interesting which led me to believe you wouldn’t either. If I can’t enjoy writing it I will not commit to it.

So then I thought about writing a blog post every day from the 1st to the 25th. Youtubers and some bloggers do something similar called Vlogmas or Blogmas where they create content every day until Christmas day.

But again, the way my patience is set up… nah.

And that’s when I came up with the idea for Drinks on Me. 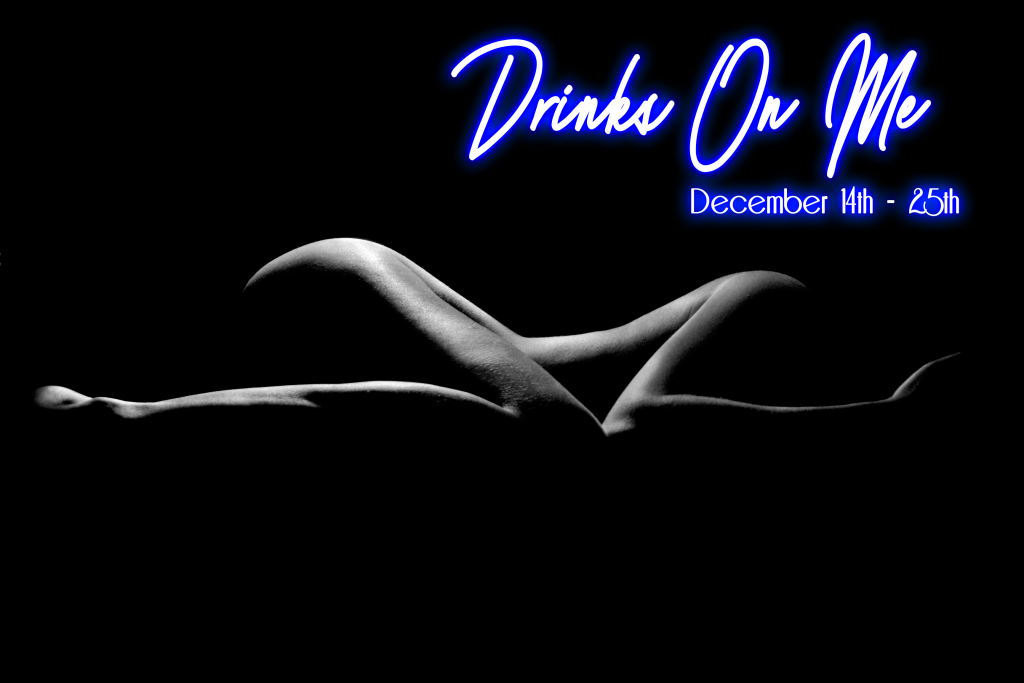 Drinks on Me will be a blog series made up of 11 vignettes and 1 short story posted every night from the 14th to the 25th on my blog here at BrookelynMosley.com. My version of 12-days of Christmas but with some eroticism with drink titles to get you drunk off words. It’s like literary inebriation with a dash of caffeine for good measure. Balance.

You may only know a vignette as a filter. But just like filters, in literature vignettes are moments in time that have one specific focus while everything else around it fades out. A vignette in photography forces you to view and interpret one part of a photograph. That view is similar to writing except instead of it being the center of a photograph you need to focus on, your focus and interpretation is based on a single scene.

They’re not as popular as they once were which is why writing them was appealing.

When I decided to work on this project I didn’t want it to be like anything I’ve ever worked on before. I wanted to challenge myself. And what better way to do that than to write shorter than I already do, offer fewer details, but still have you walk away satisfied.

So I chose vignettes over everything else.

If you are unfamiliar with vignettes, they are short impressionistic scenes that throw you the reader right into progressive action. There’s not much character development and the settings aren’t described to the point of anchoring you into a scene. You’re forced to use your imagination and fill in the blanks. Pay attention to each word since they operate as clues regarding backstory if there is any. Draw on experiences and even thoughts in your subconscious so that you can shape a scene I’ve presented. It’s organic emotion… but in this case, strictly intimate encounters.

So what is Drinks on Me exactly?

Flash fiction (the vignettes are all under 1500 words, one of them under 400) starring fictional women narrating the thrill of living for the now but mostly experiencing vivid moments of intimacy.

Back in the day there was this belief that if a man bought a woman a drink at a club or bar, she owed him something. A drink was almost like a staked claim. An expectation was set the second that drink was accepted.

So I made the titles drink themed, from coffee to sangria.

The women in the Drinks on Me series are bold, strong, majestic even. She couldn’t care less about being judged for her actions and challenges the status quo. Some are more delicate than others but they are not afraid to admit they enjoy the pleasures of intimacy. The drinks match their personalities and the scenarios they narrate. They are metaphorically buying their own drinks and their men’s drinks too. Owning the exchange of power and not accepting dated beliefs that leave them feeling subconscious about their desires.

This collection of tales is abstract, so you might have questions after reading them… just like I want you to. Some characters don’t have names and their love interests don’t either. Most of their baes aren’t even described in detail. I’ve left that up to you. All you must go on is the emotion of a single scene. But I promise, they are good. I’m bias though.

Every night at midnight starting December 14th, there will be a new vignette published. One of those days before Christmas there will be one short story that is longer than the others.

They’re like literary stocking stuffers and will only be posted here. The stories may be unlisted and password protected with a clue posted for you to unlock the story. I’m still working out the fine details.

[Edited to say: So, there will be no password to access the stories. It would have been too complicated with what I have in mind.]

Here is the menu of story titles, listed in no particular order:

You can subscribe to my blog in the comments or sign up to join my BK Insiders Club so you are notified when new stories are published. As an insider, you’ll receive an email at the end of each week with story links and will receive two free short stories today just for signing up.